The global trend in colours for exterior coatings is a shift from pastels to brighter shades.Bismuth vanadate (BV) based pigments are among the most suitable yellow pigments for exteriors due to their high covering power, high thermal and chemical stability and brilliant colour.These materials exist in different crystal forms, making it possible to obtain a wide variety of chromatic shades.

The objective of this article is to present the main characteristics of the bismuth-based colouring pastes used in the EuroColori colour range.Three pigments for water-based systems for exterior application were used:

The most important component of a paint is undoubtedly the binder, which has a significant impact on the coating’s final properties.Paint bases are usually either transparent or white.A transparent base contains no fillers, while a white base may contain non-transparent white particles that act as fillers or additives.Transparent bases produce stronger colours, while white bases produce pastel shades.

For this study, an interior/exterior water-based paint with an acrylic resin base (70% of content) was used. The transparent base (TB) version contained no fillers or titanium dioxide, while the white base (WB) contained 20% w/w of TiO2.

The optical properties of the coatings were described in terms of reflectance spectrum and CIELAB colour space.The CIELAB parameters are summarized in Table 1 and the RGB representations of the colouring pastes are provided in Figure 1. 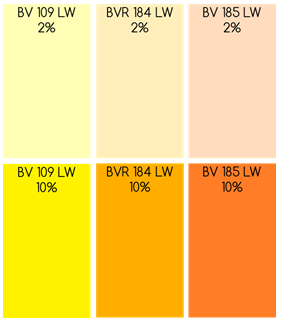 The reflectance spectra for the three pigments are shown in Figure 2.The main difference between the curves is the different reflectance at approximately 530 nm.At this wavelength, the reflectance of BV 185 LW is lower than the other two colourings, resulting in lower L* values in both bases.

The largest differences are found, however, when changing from a transparent base (TB) to a white base (WB).The titanium dioxide present in the white base results in a gradual increase in light scattering over the entire visible spectrum, leading to higher reflectance values (approximately 30-35%).This phenomenon causes a decrease in the saturation value C*, which is systematically lower in the WB samples than the TB samples (approximately 51%). 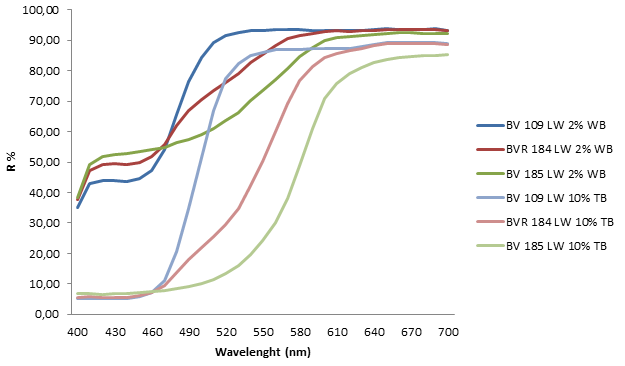 Figure 2. Reflectance curves for the studied samples, prepared with bismuth-based colouring pastes in white base (2%) and transparent base (10%).

The use of colouring pastes in white base (in a quantity of 2%) therefore leads to the production of pastel shades, while in transparent bases (in a quantity of 10%) they produce deeper colours.While BV 109 LW does not change significantly from a chromatic perspective in the two different bases, BVR 184 LW and BV 185 LW produce shades that are decidedly more orangish and reddish-orange respectively. This enables the range of colours to be widened considerably by changing the bismuth-based colouring paste (Figure 3). 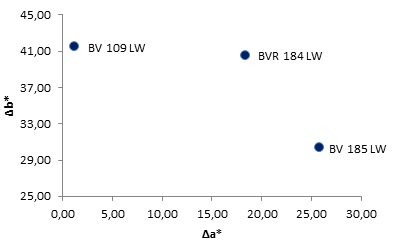 Figure 3.  CIELABspace of the three colouring pastes expressed in values of Δa* and Δb*.

To illustrate how varying the bismuth-based colouring enables modification of CIELAB colour space coverage, the results of a study conducted using the most-utilized colour system for decorative coatings – the NCS – are provided.The formulation study was developed using three sets of 16 Cromshade colouring pastes in which only the bismuth-based paste was varied, keeping the other 15 pastes constant.

The resulting colour spaces for the NCS system are shown in Figure 4. The colour coverage is almost equal (approximately 77%) for the three sets of colouring pastes studied for ΔE cut-off values of less than 1.  As shown in Figure 4, the three pastes studied enable variation in colour development, particularly in the areas marked in red.These results are in agreement with those described in Figure 3. 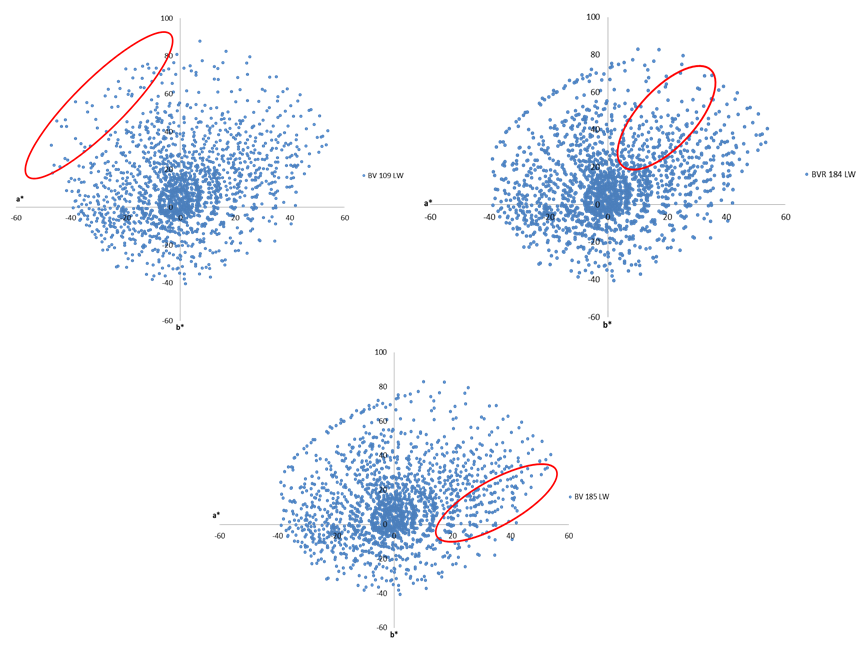 These different colours can be explained by band theory and especially the energy gap (Eg) existing between the valence and conduction band for bismuth vanadate-based systems.

It is known that BiVO4 exists in three polymorphs, whose electronic properties influence colorimetric properties.In order to quantify this effect, the Eg values were estimated (summarized in Table 2) beginning from the inflection point of the K/S curve of the colouring paste of interest.

In the case of BV 109 LW and BVR 184 LW, the Eg values are in agreement with the theoretical data from the DFT (Density Functional Theory) computational calculation, which results in an Eg of approximately 2.45 eV. This data is compatible with a Scheelite-type monocline structure, the most thermodynamically stable structure for this family of pigments [2, 3].The case of BV 185 LW is different, with an experimental value of approximately 2.15 eV that could be ascribed to a hypothetical cubic or tetragonal structure of PO 85.

Therefore, in terms of colour strength and saturation, these colouring pastes are ideal choices for developing a tinting system for architectural coatings.

Today, choosing a colour is easier with IdentiKolor